It is a great honor to have the art of Lou Beach featured on the Love + Water blog.  Not only is Lou one of the most accomplished and renowned artists we know, but I have been a personal fan of his work for quite some time, as well as his brilliant, gut-wrenching sense of humor.  Let’s have a look at an excerpt from the bio section of his site, and then let’s let the work speak for itself:


It may be apocrypha, but the story going around the Beach table is that when little Lou was crib-bound, a stack of magazines and newpapers were placed alongside the teddy bear and blanket. Lou would spend hours tearing the paper into little pieces. This early mess was the beginning of a collage career that has spanned 40 years. (It may have been the earliest known paper shredder as well.)
Truth be told, there was no Beach table. The folks sitting around that plank eating kielbasa were actually named Lubicz. That’s pronounced “loo-beech”. And Lou’s birth name is Andrzej Jerzy Gregor Lubicz-Ledochowski. Why he would change it to Lou Beach has been a source of no small consternation to his mother, but a blessing to receptionists everywhere.

All the pieces below, except the last three, are personal pieces for an upcoming show I’m having with my two kids in November here in L.A.  The show is called Gene Pool and both of my kids, Alpha Lubicz and Sam Lubicz, are terrific artists. 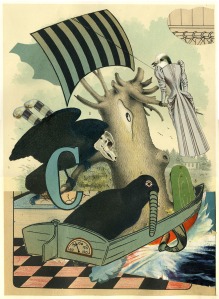 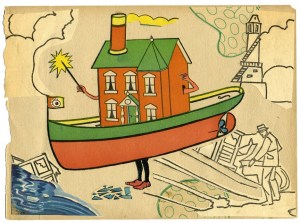 Stuart Whitton’s work is mesmerizing and soothing, with an undercurrent of passion that stirs the senses.  His way of creating organic- looking art with earth tones and textures typifies the meaning of unique.  Plus, his lettering is outstanding, which is exciting to us as well.  While his website is under construction, Stuart has an outstanding blog that is worth checking out.  Since he is an outstanding writer, we were excited to let him speak for his work.  Here is what Stuart had to say about some of his work:
INTERWOVEN 07

This illustration was created purely with pencil and is the last piece in my Interwoven series, a self initiated project that pursues an exploration into seamlessly combining the form of both synthetic and organic elements. The series consists of seven original drawings featuring with what could be described as provocative overtones.
HONOUR YOUR CITY – CASTELL NEDD 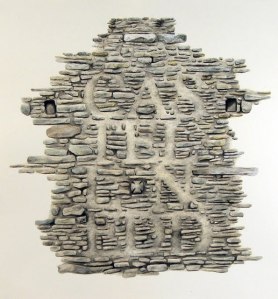 This painting was commissioned for CitID as a contribution to their project titled ‘Honour Your City’. The brief was to capture the vibe of where I lived and produce a logo/artwork depicting why view on my area.
As a resident of a Neath, South Wales I felt that the historical aspects of the area would be the best way to depict the town. Having spent a wonderful sunny afternoon walking around and photographing Neath Abbey Ruins I knew what the piece had to consist of.
MAIL ME ART

This piece is my submission for a project called Mail Me Art, which is principally a monthly competition that requests creatives to produce their artwork on various types of mail products. I chose a brown envelope to add a subtle colour underneath the pencil tone that depicts the folded form of fabric.
The project will be made into the book featuring all the artwork, and is currently being shown in an exhibition at the Red Gate Gallery, London where viewers can buy the original artwork. The exhibition titled ‘Medium Without a Message’ will be an amazing collection of envelopes and boxes from around the world decorated by some of today’s most talented illustrators and artists.
The exhibition runs from: Friday 30th of July – Thursday 5th of August 2010
Z- ALPHABET 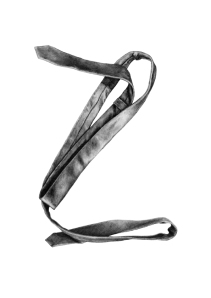 The ‘Z’ depicted here is a part of a complete Alphabet created through the manipulation of several clothing items to form letters. This particular project has been the best received out of all my work to date. I adore typography and will surely enjoy exploring the artform further in my career. All the letters were hand drawn with pencil.
My website is currently under construction so in the mean time visit http://www.stuartwhitton.blogspot.com