Where are you from? A literal and spiritual mix of Uganda, Jamaica, Spain and NYC.
What do you do?  Everything. And nothing.
What would you do if you could do anything your heart desired, right now?  Dance across the planet sampling the best wines, learning new languages and laughing wildly.
What do you love about your Love and Water Designs shirt?   The humanitarian cause, the colours, the design, the fit and the superhero elevation it gives me.

Don’t forget, if you like the work that Love+Water Designs does and you want to support us, donate to our Indiegogo campaign! Only 36 days left to help us relaunch!

Where are you from?
Philadelphia, PA

What do you do?
I act and model.

What would you do if you could do anything your heart desired, right now?

I would round up my family and friends and take them on a vacation to Monaco, Dubai or Capetown.

What do you love about your Love and Water Designs shirt?
I love that my shirt helps others that need help, and because of its cool design it grabs attention from others so I can spread the word in hopes of them supporting a good cause as well. 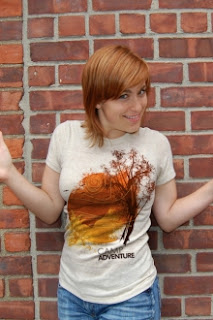 We have a NEW shirt, designed by artist Fernando Alves in the name of the American Cancer Society’s CAMP ADVENTURE, a summer camp for kids with cancer and their siblings!!!

Get it while it’s HOT…

Fernando Alves is the kind of illustrator who works so diversely that there is no telling what he might come up with next!  Living in Brazil, his work has an incredible range that is both exciting and thought-provoking.  Have a look at his site to see the extensive body of work he continues to create.

Luckily, we at Love+Water designs received some new designs by him inspired by our December Featured Charity, Alex’s Lemonade Stand Foundation.  Have a look at his work for this amazing organization and Vote, Rate and Comment on them!  If his designs get printed, 50% of all profits will go directly to Alex’s Lemonade- and Fernando will win a cash prize as well!

Fernando Alves is a POWERHOUSE illustrator from Brazil whose work can just knock your socks off.  He is a penciler and illustrator with over 12 years of experience doing work for large companies.  As a graphic novel fan, I’m particularly drawn to his ability to create an entire world upon first glance.  Each piece seems to tell a whole story that resonates immediately on an emotional, visceral level.  I’m a huge fan.  Here is what he has to say about his work:

This is an illustration from the online magazine “IDEIA FIXA.”  The theme of the 17th edition was called “Underground. ” I made two suggestions to GOTHIC and PUNK belonging to this urban tribe with different styles and visuals.
The Pilot

This illustration was made for an energy called “Night Power,” were four characters created, “THE DIRECTOR”, “THE SKATER”, “THE DEEJAY” and “THE PILOT.”   A series of illustrations I did for this concept that can be viewed on my website.
International Day of Rock

This was a personal work for a friend who has the same birthday as me.  We commemorate the rock world; he is a fan of these four masters of rock singers: OZZY, STEVEN, KISS AND SLASH, which I printed a T-shirt and gave as a gift.   He really liked it. 😀
The DJ

This is an illustration of a dj for the series of posters for energy NIGHT POWER which can be viewed on my website.
This concept follows a line with some Frank Miller with touches of red and yellow, the same color as the logo of energy “Night Power.”
Visit Fernando’s site
Follow Fernando on Twitter: @ferdysmart

Error: Twitter did not respond. Please wait a few minutes and refresh this page.